skip to main | skip to sidebar

A pioneering method to treat dyslexia sufferers appears to be helping a group of West Midlands schoolchildren to get over the learning disorder.Pupils at Balsall Common Primary School near Solihull were tested in January 2001, with 40 identified as potentially having dyslexia. 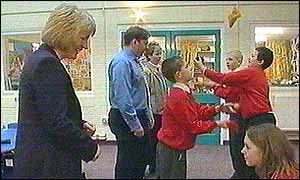 Over the last two years, the children have been taking part in daily hand-eye co-ordination tests, involving exercises such as catching bean-bags and balancing on "wobble boards". The school claims the new approach, pioneered by the Kenilworth Dyslexia Centre, has proved highly successful.

Headmaster Trevor Davis said the academic achievements of some of the pupils who have been taking part in the exercises has been very noticeable."(There has been a) 300 to 400 % improvement in many cases in terms of their results," he said."SATS results have improved and, on top of that, self-esteem."

Jake Powell, who was identified as a dyslexia sufferer, said the approach has worked for him." Ever since I started the exercises my levels have gone higher and I am now on a 3C level," he said.His father John Powell is also a fan of the treatment."I believe that system works and I believe it should be put into part of the education system," he said.

Shirley Cramer, chief executive of the Dyslexia Institute, which assesses children nationally, said she would like to see more research into the findings."It's encouraging that some children have seen improvements, but the researchers who've looked at this are very concerned about the methodology", she said.

"We need to do more long-term research to see why it works for some kids and not others."

Posted by Mirosław Urban at 9:45 AM

Excellent blog,
Really, you are sharing a nice post which is very interesting and useful for us.
Contact jongleren